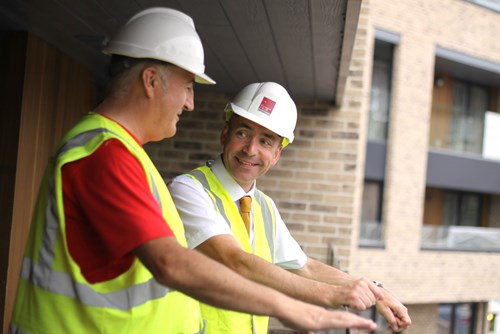 One of Scotland’s leading family businesses, fourth-generation-owned Mactaggart & Mickel Group have today (31 October) announced their financial results for the year to 30 April 2018.

The impressive set of financial results received a further boost from the English Strategic Land division, where continued investment in promoting land through the planning process and successfully securing residential consents, has resulted in the division recording its highest performing year, contributing £8.1m to revenue (2017: £4.7m) and £6.9m to gross profit (2017: £3.1m).

The strategy of expanding into the UK housebuilding market is now firmly cemented with the opening of the company’s new English headquarters in Cheltenham and the acquisition of additional sites for future development in Oxfordshire.

“It’s been a very successful year and we are in an extremely robust financial position. Group profits before tax are £14.2m – one of the highest profit levels ever achieved in the company’s 93 years – and up 11% year-on-year. Turnover was also up 11% to £82.3m.

“Our expansion into the English housebuilding market is a natural progression for the Group and the most visible sign of our successful diversification strategy.  We reached an important milestone this year with the opening of our first office outside Scotland – in Cheltenham – and the start of on-site works on our development at Milton-under-Wychwood in South Oxfordshire.

“Supported by the continued strong performance by Homes Scotland, we are delighted to receive a 5-star rating for customer satisfaction from the Home Builders Federation for the sixth year in a row, reinforcing our reputation for quality housebuilding and unmatched customer service.

“Importantly, we are continuing to invest in our employees and recently received the prestigious Investors in People Platinum accreditation and Investor in Young People Good Practice Award Silver.  Thanks to our successful expansion plans, we intend to recruit a number of new employees over the coming months, throughout Scotland and England.

“The Group’s outlook for 2019 remains bright, despite the uncertainty surrounding the UK’s departure from the EU, as we progress several exciting new opportunities, broaden our geographical reach and continue to build on the foundations for our future success.”