The CEO of family-owned housebuilder Mactaggart & Mickel has been named ‘director of the year’ by the Institute of Directors at a celebration of Scotland’s leading businesses.

In a year that saw almost 200 entries, 54 business leaders were shortlisted for last night’s awards. The success is testament to Ed’s leadership of the fourth-generation family-run company, which he joined as an apprentice more than 40 years ago.

“Scottish businesses have faced significant challenges over the last year, which we have all had to respond to,” said Ed.

“During these challenging times, Mactaggart & Mickel have retained its reputation for excellence and for doing things the right way.

“I have been humbled to lead our company through this period and am honoured to represent Scottish businesses on the UK stage.”

The award was given for the Group’s performance and success during the three years leading up to April 2020. During this time, the Group has:

Commenting on Ed’s award last night, IoD judges said: “Ed is at the helm of a substantial and long-established family business. While he is not a family member, he is pivotal to the continuation of the family’s values, which is usually a very difficult task.

“The business has a model set of governance arrangements and Ed is deeply involved in that. He also demonstrates significant experience and understanding of what is required to be at the helm of one of Scotland’s premier family businesses.” 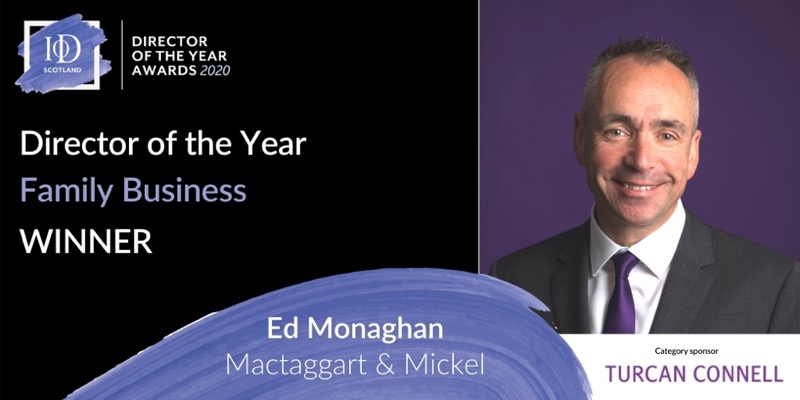